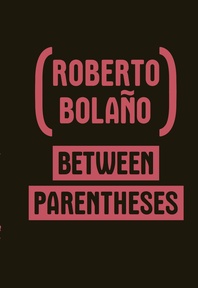 The essays of Roberto Bolaño in English at last.

Between Parentheses collects most of the newspaper columns and articles Bolano wrote during the last five years of his life, as well as the texts of some of his speeches and talks and a few scattered prologues. “Taken together,” as the editor Ignacio Echevarría remarks in his introduction, they provide “a personal cartography of the writer: the closest thing, among all his writings, to a kind of fragmented ‘autobiography.’” Bolano’s career as a nonfiction writer began in 1998, the year he became famous overnight for The Savage Detectives; he was suddenly in demand for articles and speeches, and he took to this new vocation like a duck to water. Cantankerous, irreverent, and insufferably opinionated, Bolano also could be tender (about his family and favorite places) as well as a fierce advocate for his heroes (Borges, Cortázar, Parra) and his favorite contemporaries, whose books he read assiduously and promoted generously. A demanding critic, he declares that in his “ideal literary kitchen there lives a warrior”: he argues for courage, and especially for bravery in the face of failure. Between Parentheses fully lives up to his own demands: “I ask for creativity from literary criticism, creativity at all levels.”

“He’s the most controversial and commanding figure to have emerged since Gabriel Garcia Marquez and Mario Vargas Llosa began issuing mature work in the early 1960’s… The excellent thing about Between Parentheses is how thoroughly it dispels any incenses or stale reverence in the air. It’s a loud, greasy, unkeppt thing. Reading it is not like sitting through an air-conditioned seminar with the distinguished Senor Bolano. It’s like sitting on a barstool next to him, the jukebox playing dirty flamenco.” — Dwight Garner, The New York Times

“Bolano’s judgments are a joy to read. Between Parentheses is a treasure chest: filled with odd glittering jewels and fistfuls of gold. In these essays we hear Bolano’s real voice, the one he often disguised through the ventriloquism of his fiction.” — Marcela Valdes, The Nation

“What a refreshing surprise it is to hear Bolaño in his own words.” — J.C. Gabel, TimeOut Chicago

“One emerges from Between Parentheses with the desire to read more — to read more Bolano, re-read Borges, to discover Nicanor Parra and Enrique Lihn and Carmen Boullosa.” — Marianne Moore, Zyzzyva

“The essays in Between Parentheses preserve for us the voice of the seasoned and accomplished Bolano, the man who, as he was whipping up these various tapas, was also tending the large pot simmering with the eventual 2666, and was very likely aware that his days were numbered. I would like to have the culture, the knowledge, that would let me enjoy his responses to his fellow writers as they were meant to be enjoyed, but even without that—and it is a considerable deficit—the collection delights. How not? Spirit, where it exists, shines through. Roberto Bolano was one of the ones for whom literature was everything.” — Sven Birkets, Aysmptote