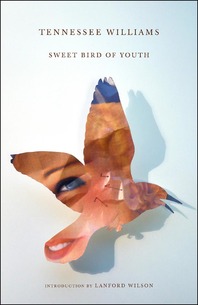 Now with an insightful new introduction, the author's original Foreword, and the one-act play, The Enemy: Time, on which Sweet Bird of Youth was based.

Tennessee Williams knew how to tell a good tale, and this steamy, wrenching play about a faded movie star, Alexandra Del Lago, and about the lost innocence and corruption of Chance Wayne, reveals the dark side of the American dreams of youth and fame. Distinguished American playwright Lanford Wilson has written an insightful Introduction for this edition. Also included are Williams’ original Foreword to the play; the one-act play The Enemy: Time—the germ for the full-length version, published here for the first time; an essay by Tennessee Williams scholar, Colby H. Kullman; and a chronology of the author’s life.

“Knowing his subject with chilling intensity, Mr. Williams peels off layer after layer of the skin, body, and spirit of his characters and leaves their nature exposed.” — Brooks Atkinson, The New York Times

“Be especially sensitive to the play as he's written it, as he saw and heard it in his imagination...this is not realism. This is a dream that keeps going wrong.” — Lanford Wilson, from his Introduction