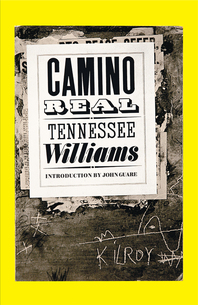 Now with a new introduction, the author's original Foreword and Afterword, the one-act play 10 Blocks on the Camino Real, plus an essay by noted Tennessee Williams scholar, Michael Paller.

In this phantasmagorical play, the Camino Real is a dead end, a police state in a vaguely Latin American country, and an inescapable condition. Characters from history and literature—Don Quixote, Casanova, Camille, Lord Byron—inhabit a place where corruption and indifference have immobilized and nearly destroyed the human spirit. Then, into this netherworld, the archetypal Kilroy arrives—a sailor and all-American guy with “a heart as big as the head of baby.” Celebrated American playwright John Guare has written an illuminative Introduction for this edition. Also included are Williams’ original Foreword and Afterword to the play, the one-act play Ten Blocks on the Camino Real, plus an essay by noted Tennessee Williams scholar Michael Paller.

"Camino Real has a very small bull's eye. It's difficult to hit, but when you do, when you do - the world's a brand new place." — John Guare

"There are people who think that Camino Real was Tennessee Williams' best play and I believe that they are right. It is a play torn out of a human soul." — Clive Barnes, The New York Times