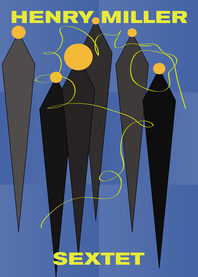 The best of Miller’s chapbooks bound into a single roaring volume.

Resembling a musical sextet where no two instruments are the same, but all instruments blend to form a single sound, Henry Miller’s Sextet combines six jive-talkin’, fresh, and impromptu pieces of writing originally published as individual chapbooks by Capra Press: “On Turning Eighty,” “Reflections on the Death of Mishima,” “First Impressions of Greece,” “The Waters Reglitterized: The Subject of Water Colors in Some of its More Liquid Phases,” “Reflections on The Maurizius Case: A Humble Appraisal of a Great Book,” and “Mother, China and the World Beyond: A Dream in Which I Die and Find Myself in Devachan (Limbo) Where I Run into My Mother whom I Hated All My Life.”

Like your favorite band releasing a six-song EP to keep you salivating until its next full-length album, Sextet is a finger-snapping sample of Miller’s work with the blare of a clarion call, and lots of raucous humor and jazz.

“One of the few honest and uncompromising American writers.” — Hunter S. Thompson

“Miller is a writer out of the ordinary, worth more than a single glance; and after all, he is a completely negative, unconstructive, amoral writer, a mere Jonah, a passive accepter of evil, a sort of Whitman among the corpses.” — George Orwell