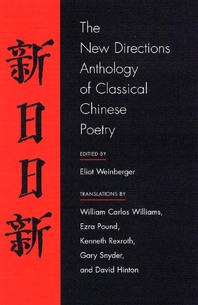 A groundbreaking anthology of classical Chinese translations by giants of Modern American poetry. A rich compendium of translations, The New Directions Anthology of Classical Chinese Poetry is the first collection to look at Chinese poetry through its enormous influence on American poetry. Weinberger begins with Ezra Pound's Cathay (1915), and includes translations by three other major U.S. poetsWilliam Carlos Williams, Kenneth Rexroth, Gary Snyderand an important poet-translator-scholar, David Hinton, all of whom have long been associated with New Directions. Moreover, it is the first general anthology ever to consider the process of translation by presenting different versions of the same poem by various translators, as well as examples of the translators rewriting themselves. The collection, at once playful and instructive, serves as an excellent introduction to the art and tradition of Chinese poetry, gathering some 250 poems by nearly 40 poets. The anthology also includes previously uncollected translations by Pound; a selection of essays on Chinese poetry by all five translators, some never published before in book form; Lu Chi's famous "Rhymeprose on Literature" translated by Achilles Fang; biographical notes that are a collage of poems and comments by both the American translators and the Chinese poets themselves; and also Weinberger's excellent introduction that historically contextualizes the influence Chinese poetry has had on the work of American poets.

“A lonely polymath upholding American modernism from his apartment.” — Ratik Asokan, The Hindu