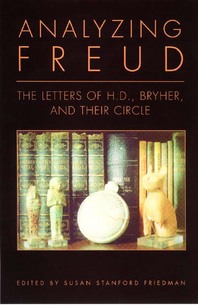 
Freud was old and fragile. H.D. was forty-six and despairing of her writing life, which, for all her success, seemed to have reached a dead end. Her sessions with Freud proved to be the point of transition, the funnel into which she poured her memories of the past and associations in the present and from which she emerged reborn. Breezy, informal, irreverent, vibrant in detail, H.D.'s letters to her companion, the novelist Bryher, revolve around her hours with Freud. This volume includes H.D.'s and Bryher's letters, as well as letters by Freud to H.D. and Bryher, most of them published here for the first time. In addition, the book includes H.D.'s and Bryher's letters to and from Havelock Ellis, Kenneth MacPherson, Robert McAlmon, Ezra Pound, and Anna Freud, among others.