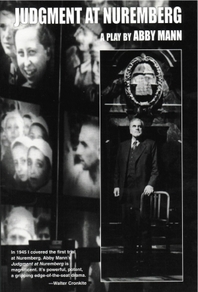 The Nuremberg trials brought to public attention the worst of the Nazi atrocities. Judgment at Nuremberg brings those trials to life.

The Nuremberg trials brought to public attention the worst of the Nazi atrocities. Judgment at Nuremberg brings those trials to life. Abby Mann's riveting drama Judgment at Nuremberg not only brought some of the worst Nazi atrocities to public attention, but has become, along with Elie Wiesel's Night and Anne Frank's Diary of a Young Girl, one of the twentieth century's most important records of the Holocaust. Originally written as a 1957 television play, later made into an Academy Award winning 1961 film, and available now for the first time in print (using the text of Mann's recent Broadway adaptation), Judgment at Nuremberg is as potent and relevant as ever. To this day the Nuremberg trials stand as a model for international criminal tribunals, due in large measure to the spotlight thrown on them by Mann's dramatic interpretation of the historic events. Mann's overwhelming compassion strikes at the heart of human suffering—his achievement has been to reaffirm humanity and justice in the wake of unspeakable evil.

"Judgment at Nuremberg retains its power to move and provoke us." — TIME

"It's devastating and the culmination of a magnificent re-enactment of the seminal trials of the modern era." — Newsweek