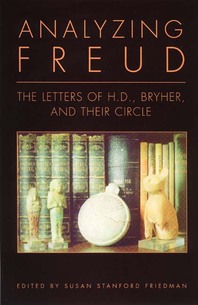 A landmark book in the studies of Freud, H.D., modernism, gender, and sexuality. The poet H.D. (1886-1961) was in psychoanalysis with Sigmund Freud in Vienna during the spring of 1933 and again in the fall of 1934. She visited him daily at his study at 19 Berggasse, while outside Nazi thugs and militia bullied their way through the streets. Freud was old, and fragile. H.D. was forty-six and despairing of her writing life, which seemed to have reached a dead end, for all her success. Her sessions with Freud proved to be the point of transition, the funnel into which were poured her memories of the past and associations in the presentand from which she emerged reborn. H.D. came to Freud at the urging of her companion, the novelist Bryher (1884-1983), the daughter of a wealthy British shipping magnate. Freud welcomed H.D. as a creative spirit whose work he respected, but he did ask her not to prepare for their sessions, write about them in her journal, or talk about them with her friends, especially Bryher, who remained home in England. H.D.'s letters from Vienna filled the gap. Breezy, informal, irreverent, vibrant with detail, they revolve around her hours with Freud, making her correspondence unique in the spectrum of reminiscences, journals, memoirs, and biographies swirling around the legacy of the "Professor" and the movement he founded. The volume includes H.D. and Bryher's letters, as well as letters by Freud to H.D. and Bryher, most of them published for the first time. In addition, the book includes H.D. and Bryher's letters to and from Havelock Ellis, Kenneth MacPherson, Robert McAlmon, Ezra Pound, and Anna Freud, among others. Fully annotated with Index and Photographs