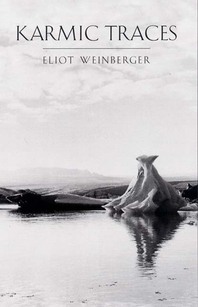 For the past twenty years, Eliot Weinberger has been taking the essay far beyond the borders of literary criticism or personal journalism and into the realm of poetry and narrative. Full of stories, yet written in a condensed, imagistic language, his essays are works of the imagination where all the facts are verifiable. As entertaining as fiction and as vivid as poems, making unexpected stops in odd corners of the globe or forgotten moments in human history, erudite, politically engaged, and acerbically witty, there is nothing quite like his work in contemporary writing. In Karmic Traces, his third collection with New Directions, twenty-four essays take the reader along on the author’s personal travels from the Atacama Desert to Iceland to Hong Kong on the verge of the hand-over to China, as well as on imagined voyages on a 17th-century Danish ship bound for India and among strange religious cults or even stranger small animals. One never knows what will appear next: Viking dreams, Aztec rituals, Hindu memory, laughing fish, or prophetic dogs. And in “The Falls,” the long tour-de-force that closes the book, Weinberger recapitulates 3,000 years of history in a cascade of telling facts to uncovering the deep roots of contemporary racism and violence.