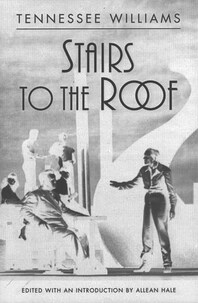 A play produced only twice in the 1940s and now published for the first time reveals that Tennessee Williams anticipated the themes of Star Trek by decades.

Sixty years ago a young Tennessee Williams wrote a play looking toward the year 2001. Stairs to the Roof is a rare and different Williams' work: a love story, a comedy, an experiment in meta-theater, with a touch of early science fiction. Tennessee Williams called Stairs to the Roof "a prayer for the wild of heart who are kept in cages" and dedicated it to "all the little wage earners of the world." It reflects the would-be poet's "season in hell" during the Depression when he had to quit college to type orders eight hours a day at the International Shoe Factory in St. Louis.

Stairs is Williams' revenge, expressed through his alter ego, Benjamin Murphy, the clerk who stages a one-man rebellion against the clock, the monotony of his eight-to-five job, and all the dehumanizing forces of an increasingly mechanized and commercial society. Ben's swift-moving series of fantastic adventures culminate in an escape from the ordinary that is an endorsement of the American dream. In 1941 with the world at war and civilization in danger of collapse, Williams dared to imagine a utopian future as Ben leads us up his stairs towards the Millennium.

Stairs to the Roof was produced only twice, once at the Playbox in Pasadena, California, in 1945, and subsequently at the Pasadena Playhouse in 1947. Now, in an edition meticulously prepared by noted Williams scholar Allean Hale, Williams fans can share this play of youthful optimism.