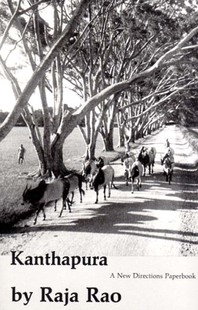 Raja Rao’s Kanthapura is one of the finest novels to come out of mid-twentieth century India.

Kanthapura is the story of how Gandhi’s struggle for independence from the British came to a typical village, Kanthapura, in South India. Young Moorthy, back from the city with "new ideas," cuts across the ancient barriers of caste to unite the villagers in non-violent action––which is met with violence by landlords and police. The dramatic tale unfolds in a poetic, almost mythical style which conveys as never before the rich textures of Indian rural life. The narrator is an old woman, imbued with the legendary history of the region, who knows the past of all the characters and comments on their actions with sharp-eyed wisdom. Her narrative, and the way she tells it, evokes the spirit of India’s traditional folk-epics. This edition includes extensive notes on Indian myths, religion, social customs, and the Independence movement (given at the end of the book) which fill out the background for the American reader’s more complete understanding and enjoyment.