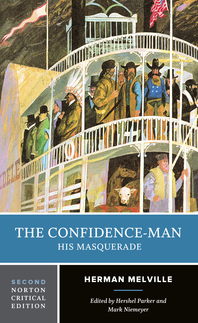 The text of The Confidence-Man reprinted here is again that of the first American edition (1857), slightly corrected.

"Contemporary Reviews" includes nineteen commentaries on The Confidence-Man, eight of them new to the Second Edition. Better understood today are the concerted attacks on Melville by, especially, Presbyterian, Congregationalist, and Methodist reviewers.

A new section, "Biographical Overviews," embodies the transformation of knowledge about Melville’s life that has occurred over the last three decades. This section provides a wide range of readings of Melville’s life by Nathaniel Hawthorne, Dennis Marnon, and Hershel Parker, among others.

"Sources, Backgrounds, and Criticism" is thematically organized to inform readers about movements and social developments central to Melville’s America and to this novel, including utopias, cults, cure-alls, Transcendentalism, Indian hating, the Bible, and popular literature.