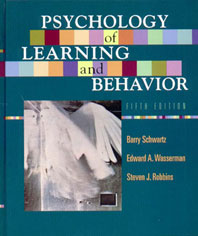 Now in its Fifth Edition, Psychology of Learning and Behavior is one of the most highly regarded texts in its field.

Barry Schwartz, Steven Robbins, and new coauthor Edward Wasserman offer students an engaging introduction to the basic principles of Pavlovian conditioning, operant conditioning, and comparative cognition. The text’s critical approach exposes students to the unresolved problems and controversies surrounding behavior theory and encourages them to interpret the material and make connections between theories and real-life situations. With several hundred new references, a new emphasis on comparative cognition, and expanded treatment of neuroscience and the neural basis of learning, the Fifth Edition sets the standard in its coverage of contemporary theory and research.