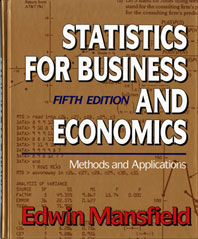 As in previous editions, three principal objectives guided the writings of this book: first, to explain statistical methods used in business and by economists in the clearest possible way; second, to draw case material from real-world situations in order to demonstrate the practical applications of those methods; third, to surround both theory and cases with an abundance of problems, based on real data whenever possible and graded in level of difficulty.