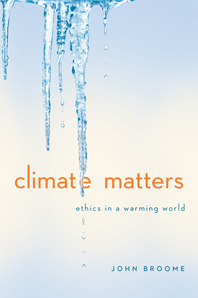 A vital new moral perspective on the climate change debate.

Esteemed philosopher John Broome avoids the familiar ideological stances on climate change policy and examines the issue through an invigorating new lens. As he considers the moral dimensions of climate change, he reasons clearly through what universal standards of goodness and justice require of us, both as citizens and as governments. His conclusions—some as demanding as they are logical—will challenge and enlighten. Eco-conscious readers may be surprised to hear they have a duty to offset all their carbon emissions, while policy makers will grapple with Broome’s analysis of what if anything is owed to future generations. From the science of greenhouse gases to the intricate logic of cap and trade, Broome reveals how the principles that underlie everyday decision making also provide simple and effective ideas for confronting climate change. Climate Matters is an essential contribution to one of the paramount issues of our time.

“In Climate Matters John Broome brings his lucid writing, sparkling insights, and deep moral seriousness to the greatest moral challenge of our time. This is practical ethics at its most brilliant and its most significant.” — Peter Singer, Ira W. DeCamp Professor of Bioethics, Princeton University

“Climate Matters takes up where most books about global warming leave off. John Broome writes clearly and thoughtfully about the most pressing questions of our time.” — Elizabeth Kolbert, author of Field Notes from a Catastrophe

“Broome applies ethical principles logically to private moral behavior and sound government policy on climate change, with interesting and sometimes surprising results. I want to argue with some of it, and climate change is worth arguing about.” — Ross Garnaut, former climate change advisor for the Australian government

“How refreshing to have John Broome, an economist, argue that we should incorporate ethics in climate policy formation.” — Lester R. Brown, president of Earth Policy Institute and author of World on the Edge

“Unmanaged climate change raises profound ethical, policy, and personal issues which must be faced directly. John Broome, one of the outstanding moral philosophers of our times, presents the issues and his conclusions in a most thoughtful, accessible, practical, and compelling way. A vitally important contribution.” — Nicholas Stern, president of the British Academy and chair of the Grantham Research Institute on Climate Change and the Environment at the London School of Economics

“For me (and for many others, I suspect) it is important to see this ethical side of climate change examined carefully by a skilled philosopher.” — Martin Weitzman, Professor of Economics, Harvard University

“John Broome is uniquely qualified to help us think through some of the more important questions. His new book is sometimes controversial and surprising, but always insightful and clear.” — James Garvey, the Times Literary Supplement