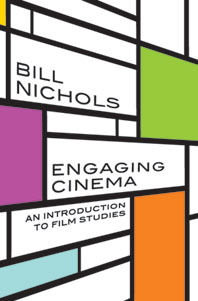 Engaging Cinema emphasizes the interactions between society and cinema and introduces students to film studies as it is actually done by scholars and critics.

In what ways do films influence and interact with society? What social forces determine the kinds of movies that get made? How do movies reinforce—and sometimes overturn—social norms? As societies evolve, do the films that were once considered ‘great’ slip into obscurity? Which ones? Why? These questions, and many others like them, represent the mainstream of scholarly film studies today. In Engaging Cinema, Bill Nichols offers the first book for introductory film students that tackles these topics head-on.

Published in a handy 'trade paperback' format, Engaging Cinema is inexpensive and utterly unique in the field—a perfect complement to or replacement for standard film texts.