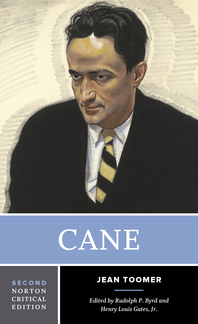 A masterpiece of the Harlem Renaissance and a canonical work in both the American and the African American literary traditions, Cane is now available in a revised and expanded Norton Critical Edition.

Originally published in 1923, Jean Toomer’s Cane remains an innovative literary work—part drama, party poetry, part fiction. This revised Norton Critical Edition builds upon the First Edition (1988), which was edited by the late Darwin T. Turner, a pioneering scholar in the field of African American studies. The Second Edition begins with the editors’ introduction, a major work of scholarship that places Toomer within the context of American Modernism and the Harlem Renaissance. The introduction provides groundbreaking biographical information on Toomer and examines his complex, contradictory racial position as well as his own pioneering views on race. Illustrative materials include government documents containing contradictory information on Toomer’s race, several photographs of Toomer, and a map of Sparta, Georgia—the inspiration for the first and third parts of Cane. The edition reprints the 1923 foreword to Cane by Toomer’s friend Waldo Frank, which helped introduce Toomer to a small but influential readership. Revised and expanded explanatory annotations are also included.

“Backgrounds and Sources” collects a wealth of autobiographical writing that illuminates important phases in Jean Toomer’s intellectual life, including a central chapter from The Wayward and the Seeking and Toomer’s essay on teaching the philosophy of Russian psychologist and mystic Georges I. Gurdjieff, “Why I Entered the Gurdjieff Work.” The volume also reprints thirty of Toomer’s letters from 1919–30, the height of his literary career, to correspondents including Waldo Frank, Sherwood Anderson, Claude McKay, Horace Liveright, Georgia O’Keeffe, and James Weldon Johnson.

A Chronology, new to the Second Edition, and an updated Selected Bibliography are also included.