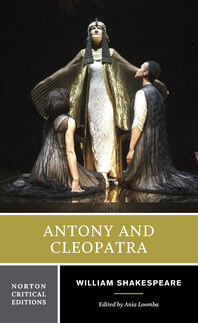 This Norton Critical Edition of Antony and Cleopatra is based on the First Folio (1623), the only authoritative text of the play. The edition includes a preface, detailed explanatory annotations, two maps, and visuals ranging from a silver tetradrachm (34 B.C.E.) to an Egyptian Queen Barbie.

“Sources, Analogues, and Contexts,” a rich selection of historical and literary writing, gives readers an understanding of Antony and Cleopatra’s origins, from the earlier texts that inspired Shakespeare, especially those by Herodotus, Plutarch, and Virgil, to later works by Chaucer, Mary Sidney (Countess of Pembroke), and Samuel Daniel. The volume also includes a wide array of the early modern English views of Egyptians, gypsies, and women that informed Shakespeare’s worldview and his writing.

“Criticism” includes fourteen essays representing four centuries of interpretation, from the early observations of Samuel Johnson to the Romantic readings of Samuel Taylor Coleridge and William Hazlitt, from the razor-sharp analyses of Anna Brownell Jameson to recent essays by Jonathan Gil Harris, Patricia Parker, Anston Bosman, and Ania Loomba, among others.

“Adaptations, Rewritings, and Appropriations” reprints alternative versions of Antony and Cleopatra’s story, including one by John Dryden, a burlesque version by F. C. Burnand, a poem by Robert Louis Stevenson, and an Arabic version by Ahmad Shawqi.