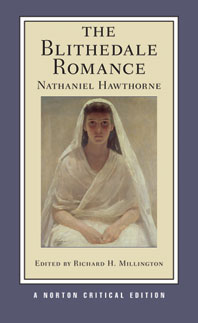 This Norton Critical Edition of The Blithedale Romance is based on the Centenary Edition of the Works of Nathaniel Hawthorne, widely considered the best available edition. It is accompanied by explanatory annotations to help readers with Hawthorne’s many historical and literary references as well as with other possible sources of difficulty in the text.

“Contexts” is thematically organized and includes a rich and varied selection of materials, both public and private, focusing on Hawthorne’s inspirations for the novel. Included are letters, excerpts from journals, published accounts of Brook Farm and the growth of antebellum social reform, Hawthorne’s letters to Sophia Peabody and Louisa Hawthorne about his first days at Brook Farm, and later letters describing his growing reservations about and decision to leave the utopian community. The Blithedale Romance raises interesting questions about the role of women, the popularity of mesmerism, and the growth of cities in mid-nineteenth-century America. Margaret Fuller, Charles Baudelaire, and Hawthorne, among others, provide invaluable insight.

A Chronology and a Selected Bibliography are also included.