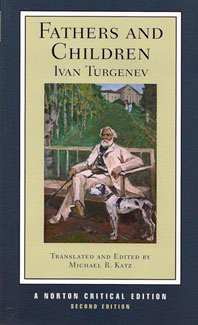 The English rendition of the title of this novel has been problematic since the book’s publication in 1862. In his prefatory note to the Second Edition, Katz explains his decision to return to the original title, the one preferred by the author himself: Ottsy i deti, literally “Fathers and Children.”

The novel is accompanied by a rich selection of Turgenev’s letters that illustrate his involvement in the critical controversy that surrounded the publication of Fathers and Children. Four of the most significant critiques of the day—by Dmitry Pisarev, Nikolai Strakhov, Apollon Grigorev, and Alexander Herzen—further enhance the reader’s understanding of this critical firestorm.

Twenty-three critical essays—seven of which are new to the Second Edition—are organized around several themes: the issue of translation; politics, including Turgenev’s liberalism, his view of revolution, and his attitude toward nihilism; and various literary aspects, including Turgenev’s use of imagery, generational conflict, the role of women, and the growing impact of science on society.

A Chronology of Tolstoy’s life and work and an updated Selected Bibliography are also included.