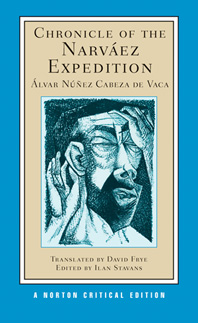 Published in 1542 to an astonished and captivated public, Chronicle of the Narváez Expedition tells the unforgettable story of a sixteenth-century soldier turned explorer who, along with three other survivors of a shipwreck, makes his way across an unknown geographic and cultural landscape. This Norton Critical Edition is based on David Frye’s new translation. It is accompanied by Ilan Stavan’s introduction, the translator’s preface, the editor’s detailed explanatory annotations, and a map tracing Cabeza de Vaca’s journey from Florida to California.

“Alternative Narratives and Sequels” enriches the reader’s understanding of and appreciation for Cabeza de Vaca’s chronicle, which can be read both as historical record and as fiction (Cabeza de Vaca having written his account years after the events took place). Gonzalo Fernández de Oviedo y Valdéz’s General and Natural History of the Indies (1535) provides a different account of the same journey, while sequels can be found in a 1539 letter from the Viceroy of New Spain to the Emperor and in Fray Marcos de Niza’s Relación on the Discovery of the Kingdom of Cibola (1539).

The Spanish explorers, soldiers, and missionaries of the period saw the New World as a place of enchantment, riches, and opportunity. This spirit is captured in “Contexts” with documents including a 1493 letter from Christopher Columbus to a potential benefactor of his future travels; Hernán Cortés’s 1520 letter from Mexico; and an excerpt from Fray Bartolomé’s Brief Account of the Destruction of the Indies (1542). A selection from Miguel León Portilla’s Broken Spears provides readers with the viewpoint of the vanquished.

A Chronology, Selected Bibliography, and Index are also included.