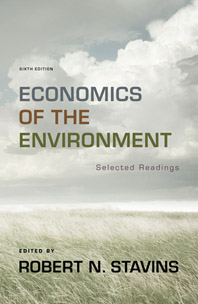 The seminal articles in Environmental Economics collected under one roof!

The field of Environmental Economics is more important than ever, with new economics theories quickly becoming government policy. The leading ideas in the field are communicated through journal articles, and the most important ones are collected in the new edition of this classic book—half the articles in the Sixth Edition are brand-new. And the editor, Robert Stavins of Harvard, is a leading international economist.

The Sixth Edition of Economics of the Environment is the most extensive one in a generation, with seventeen new articles, all of which were published after 2005. In addition, editor Robert Stavins is an increasingly prominent name, with a high-profile recent article (2011: a new look at the “Tragedy of the Commons”) that is included in the book.