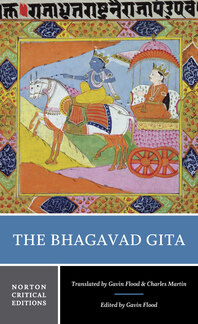 “A true translation whose literary qualities make it stand out from the rest.” –Daniel Gold, Cornell University

A devotional, literary and philosophical work of unsurpassed beauty and relevance, the universal themes of The Bhagavad Gita—life and death, war and peace and sacrifice—resonate in a West increasingly interested in Eastern religious experiences and the Hindu diaspora. The text is accompanied by a full introduction and by explanatory annotations.

This edition presents seminal commentaries on The Bhagavad Gita, including passages from The Shvetashvatara Upanishad as well as commentary by Shankara and Ramanuja, in addition to the writings of Bal Gangadhar Tilak and Sri Aurobindo. Essays by leading Hinduists discuss a wide range of issues related to the text. A bibliography is included.

"The well-balanced synergy between Professor Flood’s impeccable scholarship and the literary sensitivity of award-winning poet/translator Charles Martin delivers us a remarkable new verse translation of the ancient Hindu Scripture." — The Bookseller