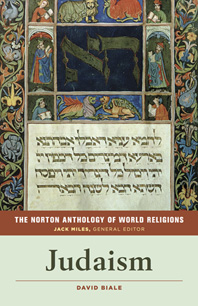 Unprecedented in scope and approach, The Norton Anthology of World Religions: Judaism brings together over 300 texts from pre-Israelite Mesopotamia to post-Holocaust Israel and America. The volume features Jack Miles’s illuminating General Introduction—“How the West Learned to Compare Religions”—as well as David Biale’s “Israel among the Nations,” a lively primer on Jewish history and the core teachings of Judaism.