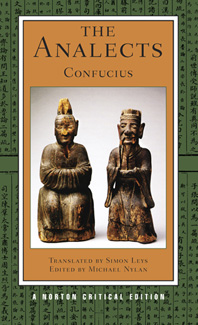 “Leys has made Confucius speak English more persuasively than any translator to date. His achievement is one of simplicity. . . . Leys sees his task as making the Confucius of the Analects fully persuasive again. He does this brilliantly.”
—Stephen Owen, The New Republic


The Norton Critical Edition aims to situate the historical figure of Kongzi, the legendary figure of Confucius, and the Analects (or Lunyu), the single most influential book ascribed to the Master's circle of disciples, within their evolving ethical, cultural, and political contexts. Simon Leys’s acclaimed translation and notes are accompanied by Michael Nylan’s insightful introduction.

Eleven essays by leading experts in the field of Chinese studies discuss a broad range of issues relating to the Analects, from the origins of the classicists (Ru) and the formation of the Analects text to the use (and abuse) of the Master’s iconic image in twentieth- and twenty-first-century Asian, diasporic, and Western settings. Collectively, these readings suggest that the Confucius we thought we knew is not the Kongzi of record and that this Kongzi is a protean figure given to rapid change and continual reevaluation. Contributors include Henry Rosemont Jr., Nicolas Zufferey, Robert Eno, Thomas Wilson, Sébastien Billioud and Vincent Goossaert, Julia K. Murray, Mark Csikszentmihalyi and Tae Hyun Kim, Eric L. Hutton, Luke Habberstad, He Yuming, and Sam Ho.