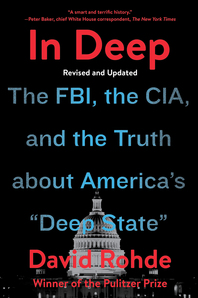 A two-time Pulitzer Prize–winning journalist’s investigation of the "deep state".

Three-quarters of Americans believe that a group of unelected government and military officials secretly manipulate or direct policy in the United States, and President Trump blames the “deep state” for his impeachment. David Rohde explores the “deep state” and asks whether it really exists.

To conservatives, the “deep state” is a government bureaucracy that encroaches on the rights of Americans. Liberals fear a cabal of generals and defence contractors who they believe push the country into wars. Modern American presidents have engaged in power struggles with Congress, the CIA and the FBI. CIA and FBI directors suspect White House aides and members of Congress of leaking secrets. Citizens increasingly distrust the politicians, unelected officials and journalists who they believe set the country’s political agenda. Now, in this time of heightened uncertainty, American democracy faces its biggest crisis of legitimacy in a half century.

In Deep examines the CIA and FBI scandals of the past fifty years. It then investigates the claims and counterclaims of the Trump era. While Donald Trump says he is the victim of the “deep state”, Democrats accuse the president and his allies of running a de facto “deep state” of their own. Now more urgently than ever, the debate over the “deep state” raises questions about the future of American democracy.

"Pulitzer-winner David Rohde dismisses the Deep State theory–but also shows government does pursue entrenched interests… Under the subtitle “The FBI, the CIA, and the Truth About America’s ‘Deep State’”, the two-time Pulitzer-winner rejects the nomenclature of conspiracy theorists." — The Guardian

"… when the author gets to Trump… the two disparate threads of his narrative come neatly together. Here Rohde skilfully makes clear that it is precisely by pedalling the myth of the Deep State that the President has been able to undermine efforts at oversight." — Lawrence Douglas, Times Literary Supplement

"… a tour of the decades-long effort to square that most unsquareable of democratic challenges: how to run clandestine intelligence and security agencies in a system that is ostensibly accountable to the people." — Financial Times

"David Rohde’s In Deep demolished the theory of the “deep state”." — 2020 in US politics books, The Guardian

"Fascinating.... The idea of the deep state, Rohde writes, is inextricably linked to a particular view of presidential power.... After reading In Deep, one can’t help wondering how much Trump’s suspicion of and disdain for expertise and experience (and the so-called ‘policy elite’) has affected his response to the coronavirus. The sad policy question is: How many lives have been lost because of his belief in the deep state?" — Dina Temple-Raston, The Washington Post

"In Deep is a compassionate critique of the simmering grievance that has now found its way to the White House, where it threatens to upend the tenets of American democracy: truth, justice, and, above all, the rule of law. Reported in stunning and tenacious detail, In Deep is a wholly satisfying read—and a necessary one for anyone wanting to understand the forces at play in our government today." — Andrea Bernstein, Peabody Award–winning co-host of the WNYC/ProPublica podcast Trump, Inc. and author of American Oligarchs .

"David Rohde has written a remarkable book that is both urgent reporting and sweeping history. He brings the same vitality and precision that animated his storied reporting on war zones to this portrait of the decades-long battle over the powers of the intelligence community, and the erosion—under recent administrations of both parties—of rules put in place to protect American citizens’ rights. And he brings fresh insight to the phrase ‘deep state,’ and the role it may play in the future of American politics." — Ronan Farrow, author of Catch and Kill