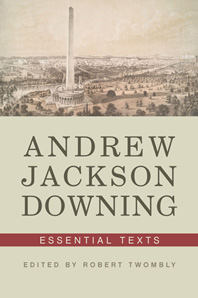 A collection of essential writings by the father of landscape architecture and the urban park movement in the United States.

Andrew Jackson Downing (1815–1852), a much-sought-after designer, influential writer, and editor of The Horticulturist, was an internationally known shaper of opinion. Robert Twombly has selected thirty-three essays on Architecture and Building, Landscape Gardening, Parks and Other Public Places, Village Beautification, Horticulture, and Agricultural Education, and provides an introduction to Downing’s life and work and suggestions for further reading.

“Twombly has brought to light Andrew Jackson Downing’s remarkable contributions to the American landscape. As one who greatly appreciates our public parks, and who was, I will admit, often taken them for granted, I will never stroll through one again without thinking of Downing. . . . [A] book that could be read straight through, and revisited often by anyone with even a passing interest in landscapes and the public environment.” — Period Homes