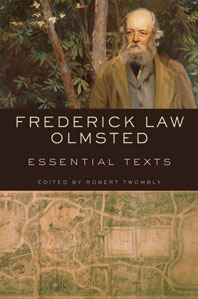 An anthology of the key writings of the best-known and arguably most prolific landscape architect in U.S. history.

Often called the father of landscape architecture, Frederick Law Olmsted was responsible for the design of Central Park and Prospect Park in New York City; Mount Royal Park in Montreal; the Belle Isle Park in Detroit; the Grand Necklace of Parks in Milwaukee; the Cherokee Park and entire parks system in Louisville, KY; and the Biltmore Estate in Asheville, North Carolina, to name a few of his most famous projects. His landscape works are enjoyed in 25 states and 3 Canadian provinces. Most of these parks were created during and immediately after the Civil War. This title presents the opportunity to witness the evolution of Olmsted’s design and social philosophies during a time of upheaval in American history.

Sixteen selections, dating from the 1850s to the 1890s, reveal Frederick Law Olmsted’s youthful interests as well as his mature thinking on cities, small residential sites, the history and theory of urban parks, and landscape architecture in general. His writings directly addressed important issues of his day, but they remain as cogent as ever in today’s environmental crisis.

“Olmsted, the most recognized landscape architects in United States history and the author of these papers, was celebrated as a member of the literati, way before he was connected with the field of landscape design. Historian Robert Twombly examines this background and Olmsted’s work, bringing the reader’s attention to some insightful remarks that put a different slant on this revered figure.” — Current Books and Reviews, Chicago Botanic Garden

“With this definitive new anthology, readers can delve into Olmsted’s personal thoughts on cities, urban parks, residential sites, and his theory of landscape architecture. These timeless writings have meaning for Olmsted’s era and our own.” — Lillian Civantos, Contract Magazine's "Talk Contract" blog