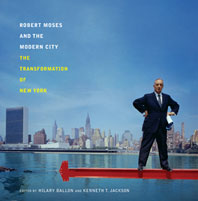 A fresh look at the greatest builder in the history of New York City and one of its most controversial figures.

“We are rebuilding New York, not dispersing and abandoning it”: Robert Moses saw himself on a rescue mission to save the city from obsolescence, decentralization, and decline. His vast building program aimed to modernize urban infrastructure, expand the public realm with extensive recreational facilities, remove blight, and make the city more livable for the middle class. This book offers a fresh look at the physical transformation of New York during Moses’s nearly forty-year reign over city building from 1934 to 1968.

It is hard to imagine that anyone will ever have the same impact on New York as did Robert Moses. In his various roles in city and state government, he reshaped the fabric of the city, and his legacy continues to touch the lives of all New Yorkers. Revered for most of his life, he is now one of the most controversial figures in the city’s history. Robert Moses and the Modern City is the first major publication devoted to him since Robert Caro’s damning 1974 biography, The Power Broker: Robert Moses and the Fall of New York.

In these pages eight short essays by leading scholars of urban history provide a revised perspective; stunning new photographs offer the first visual record of Moses’s far-reaching building program as it stands today; and a comprehensive catalog of his works is illustrated with a wealth of archival records: photographs of buildings, neighborhoods, and landscapes, of parks, pools, and playgrounds, of demolished neighborhoods and replacement housing and urban renewal projects, of bridges and highways; renderings of rejected designs and controversial projects that were defeated; and views of spectacular models that have not been seen since Moses made them for promotional purposes.Robert Moses and the Modern City captures research undertaken in the last three decades and will stimulate a new round of debate.

Robert Moses and the Modern City captures research undertaken in the last three decades and will stimulate a new round of debate.

“[A] stunning portfolio of over 50 pages of large color photographs….seven excellent essays on various aspects of the Moses legacy....an extensive catalog of specific Moses projects, a few never built, including photographs and detailed text focused on site planning, architectural design, and construction history. Urban scholars will be well served by the extensive reference notes, bibliography, and index….This important book deserves a wide audience among urbanists.” — Journal of Design History

“Those who care about urban life and its American history will find [this book] an essential source of…information and pleasure.” — Bob Hoover, Pittsburgh Post-Gazette

“[A] responsible effort to place Moses in his time, to record all of his work in New York City carefully and critically.” — The New Republic

“The considerable research that has gone into producing this book pays dividends in the fascinating detail and images.” — Alastair Donald, Urban Design