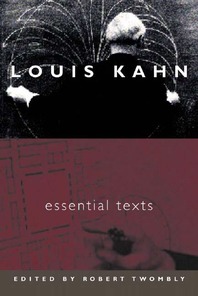 A thoughtful selection of the celebrated architect's speeches and writings.

This unique anthology draws from Louis Kahn's speeches, essays, and interviews, some never previously published, to capture the evolution and central tenets of the influential American architect's thinking from his early work of the 1940s to his death in 1974. Professor Twombly's introduction and headnotes offer incisive commentary on the texts.