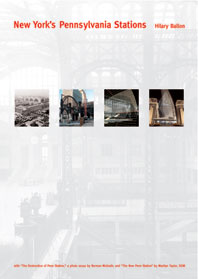 A journey through the extraordinary history of New York's Pennsylvania Station.

This is a guided tour through the past, present, and future of great civic architecture in New York City. It tells the story of Pennsylvania Station: the original building, its tragic demolition in the 1960s, and the new station designed by Skidmore, Owings & Merrill and now under construction. In stunning photographs by Norman McGrath the hidden structure of Penn Station is revealed along with the burial of the station beneath Madison Square Garden. Richly illustrated essays by Hilary Ballon and Marilyn Taylor, Skidmore, Owings & Merrill celebrated new chair, on the old and new stations illuminate their connections and indicate how public architecture and transportation planning can enhance the way millions of people experience New York City.

“[A] treat for Penn Station aficionados and those interested in the preservation of historic landmarks, architecture, urban planning and transportation.” — Design Issues

“[R]emarkable, informative….a valuable preservation of history and perspective that most commuters, rushing from one level or train to another, never think about.” — Examiner.com