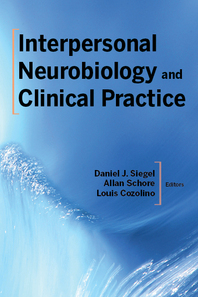 An edited collection from some of the most influential writers in mental health.

Books in the Norton Series on Interpersonal Neurobiology have collectively sold close to one million copies and contributed to a revolution in cutting-edge mental health care. An interpersonal neurobiology of human development enables us to understand that the structure and function of the mind and brain are shaped by experiences; especially those involving emotional relationships.

Here, the three series editors have enlisted some of the most widely read IPNB authors to reflect on the impact of IPNB on their clinical practice and offer words of wisdom to the hundreds of thousands of IPNB-informed clinicians around the world. Topics include: Dan Hill on dysregulation and impaired states of consciousness; Deb Dana on the polyvagal perspective; Bonnie Badenoch on therapeutic presence and Kathy Steele on motivational systems in complex trauma.