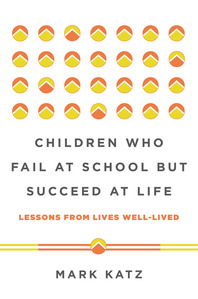 Understanding resiliency and student success by studying people who succumbed to risk but later triumphed.

A number of people who failed in school currently enjoy meaningful and successful lives. These include, though by no means are limited to, those with Attention Deficit Hyperactivity Disorder (ADHD), those with executive function challenges, those with learning disabilities, those whose learning and behavioural challenges are linked to traumatic events in their lives; even those impacted by all of the above. What’s more, they also include those who enjoyed years of access to excellent special education and mental health services. Up until recently, not much attention was paid to successful people who did poorly in school. Why not? One reason might be that few among us probably realised how many of them are actually out there. But another and even bigger reason might be that many of us doubted that it was actually possible. And those doubts are entirely understandable. After all, think of the thousands of hours parents, teachers and various healthcare professionals spent trying their hardest to help these failing children turn things around in school, sometimes with little or nothing to show for it. And if these children continued to struggle and fail in school with all this help and support, how could they ever succeed in the real world decades later without it?

So what did we miss? Why were we so wrong about them? And most important perhaps, how can their life experiences help others avoid or overcome the years of school failure they endured decades ago? In his new book, Mark Katz answers these as well as other questions. Focusing on studies of five people who were considered school failures and drawing on fields such as clinical and social psychology, cognitive neuroscience and education, Katz presents new remedies to prevent learning, behavioural and emotional problems, and reduce juvenile crime, school dropout and substance abuse.