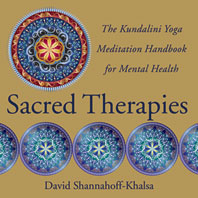 A simplified version, for consumers, of yoga protocols for optimal mental health.

This comprehensive, user-friendly handbook offers readers an innovative clinical approach using 100 different Kundalini yoga techniques in select disorder-specific protocols for treating all of the major and common psychiatric disorders. Readers will gain insight into their own symptoms by reading the official American Psychiatric Association’s Diagnostic and Statistical Manual definitions along with the associated disorders and features, and learn the step-by-step strategies essential for self-healing and relief. Seventy black-and-white illustrations are included.

“Shannahoff-Khalsa does not disappoint in his newest book. . . . Running the gamut of afflictions from small- to large-scale, Shannahoff-Khalsa’s book provides an in-depth reference guide, neatly organized and exhaustively thorough, to alternative therapies.” — PsychCentral

“The origins of psychopathological states are believed to be determined by the interactions of both the environment and genetic factors, especially during the sensitive periods of development. Since multiple risk factors can play a role in the origin of mental disorders, it is likely that multiple approaches in treatment can be used to alleviate their symptoms. Kundalini yoga meditation is a unique approach. Shannahoff-Khalsa is not only helping to disseminate this knowledge but he is also helping to set the stage to create a scientific perspective for Kundalini Yoga. In this book, he clearly describes a wide array of disorder-specific protocols that have helped uncountable individuals that can now be backed up by evidenced-based studies.” — Eurípedes C. Miguel, MD, PhD, Professor of Psychiatry and Chair, Department of Psychiatry, University of São Paulo School of Medicine