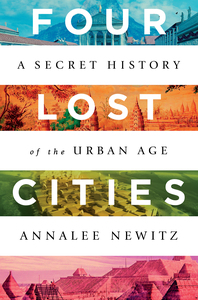 Tales of mysterious ruins have long enchanted travellers from afar, but those stories may hide something even more fascinating – and adverse.

Why do we tell apocalyptic stories about the end of society? by Annalee Newitz in The Washington Post

A fascinating look at four of the most spectacular cities in human history—and why they were all abandoned.

In Four Lost Cities, acclaimed science journalist Annalee Newitz takes readers on an entertaining and mind-bending adventure into the deep history of urban life. Investigating across the centuries and around the world, Newitz explores the rise and fall of four ancient cities, each the centre of a sophisticated civilisation: the Neolithic site of Çatalhöyük in Central Turkey, the Roman town of Pompeii on Italy’s southern coast, the medieval megacity of Angkor in Cambodia and the indigenous American metropolis Cahokia, which stood beside the Mississippi River where East St. Louis is today.

Newitz travels to all four sites and investigates the cutting-edge research in archaeology, revealing the mix of environmental changes and political turmoil that doomed these ancient settlements. Tracing the early development of urban planning, Newitz also introduces us to the often-anonymous workers—slaves, women, immigrants and manual labourers—who built these cities and created monuments that lasted millennia.

Four Lost Cities is a journey into the forgotten past but, foreseeing a future in which the majority of people on Earth will be living in cities. It may also reveal something of our own fate.

"As the American science journalist, editor and author Annalee Newitz chronicles in the superbly detailed Four Lost Cities, the cities of the past are never completely lost — exploring their histories can tell us much about our own time... an astounding reflection on the rise and fall of civilisations, on the ancient human need to cluster together in our version of burrows and ant heaps." — Nilanjana Roy, Financial Times

"The stories behind Four Lost Cities... show the importance of the deep history of urban life for our near future." — The Best Science Books to Read in 2021, New Scientist

"Excellent of its kind… fair, judicious, open-minded… the writer ruminates amid ruins... the imaginings shared are always vivid, well-informed and disciplined." — Felipe Fernández-Armesto, The Washington Post

"The book functions as a travel guide to places that no longer exist… [it] filled me with wonder." — Russell Shorto, The New York Times Book Review

"Newitz always sees to the heart of complex systems and breaks them down with poetic ferocity." — NK Jemisin, author of the Broken Earth trilogy and The City We Became

"Newitz has achieved something remarkable, taking a very personal drive to understand the way we live and using it to enliven the past, at each turn letting expert voices guide a clear-sighted discussion of the lives of marginalized populations, the potential held by new scientific methods of analysis, and—perhaps most importantly—the self-awareness that what we see of the past is very much a product of how we understand the present." — B. R. Hassett, Science