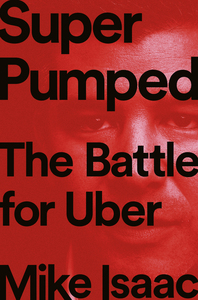 A The New York Times technology correspondent presents the dramatic rise and fall of Uber, set against the rapid upheaval in Silicon Valley during the mobile era.

In June 2017, Travis Kalanick, the CEO of Uber, was ousted in a boardroom coup that capped a brutal year for the transportation giant. Uber had catapulted to the top of the tech world, yet for many came to symbolise everything wrong with Silicon Valley. In the tradition of Brad Stone’s Everything Store and John Carreyrou’s Bad Blood, award-winning investigative reporter Mike Isaac’s Super Pumped delivers a gripping account of Uber’s rapid rise, its pitched battles with taxi unions and drivers, the company’s toxic internal culture and the bare-knuckle tactics it devised to overcome obstacles in its quest for dominance.

Based on hundreds of interviews with current and former Uber employees, along with previously unpublished documents, Super Pumped is a page-turning story of ambition and deception, obscene wealth and bad behaviour, that explores how blistering technological and financial innovation culminated in one of the most catastrophic twelve-month periods in American corporate history.

“If you want to understand modern-day Silicon Valley, you need to read this book. The tale of Uber, the queen of the so-called ‘unicorns,’ is a parable about power—and the lengths to which some startup founders will go to amass it and hold onto it. Aside from being a delicious read, Mike Isaac’s account is also teeming with new revelations that will shock and outrage you.” — John Carreyrou

“Travis Kalanick changed an entire industry, made billions of dollars, and made a company into a verb, and he did so by destroying anything and anyone who stepped in his way. A riveting read about bro culture gone awry.” — Nick Bilton, Vanity Fair

“Mike Isaac reveals the toe-curling tale of how Travis Kalanick drove a revolutionary taxi app to global success — and the brink.” — The Sunday Times

“This forensic account of the rise and fall of Kalanick is a great “behind the headlines” read for Valley types.” — The Sunday Times

“[Isaac] spins a compelling yarn that chronicles the transit company’s unruly development into… a publicly traded, billion-dollar global behemoth, often aided by spying on competitors and outwitting transportation regulators… [Super Pumped] is no dry business profile but a tale that Isaac has deeply reported yet still made accessible.” — William Nottingham, Los Angeles Times

“... entertaining and well-researched book...” — Business Book of the Year 2019, The Sunday Times

“What makes ‘Super Pumped' different, and justifies its description as a page-turner rather than a dry corporate history, is the visceral world in which Kalanick was determined to operate. It’s a gripping account of Uber’s rapid rise, its pitched battles with taxi unions and drivers, the company’s toxic internal culture and the bare-knuckle tactics it devised to overcome obstacles in its quest for dominance.” — Engineering and Technology

“Isaac is great at the ticktock of events as they unfold, but his best work comes when he steps back to examine the bigger picture.” — Leslie Berlin, The New York Times Book Review

“... if you want to understand how some of Silicon Valley’s biggest players tick, this is the book for you.” — City AM

“Mike Isaac's dramatic account of the rise and fall of Uber at the hands of founder Travis Kalanick is all thriller.” — The Evening Standard

“Mike Isaac’s dramatic account of the rise and fall of Uber at the hands of founder Travis Kalanick is all thriller.” — Festive Wish List: Tech Books 2019, The Evening Standard