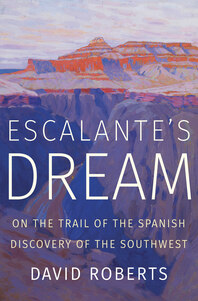 In late July 1776, fathers Francisco Atanasio Domínguez and Francisco Vélez de Escalante set out from Santa Fe to chart a route to the new Spanish missions in California. The Fransiscans planned to scout the country for mineral wealth and locate the Ute and Navajo tribes for conversion. In present-day Utah, however, the dangers of starvation and hypothermia forced them to turn back. By November the friars were reduced to survival mode: stymied by the raging Colorado River, they had to kill their horses for food.

In this adventure-history, David Roberts travels the Spaniards’ forgotten route, using Escalante’s first-person report as his guide. Blending personal and historical narrative, he relives the glories, catastrophes and courage of this desperate journey.