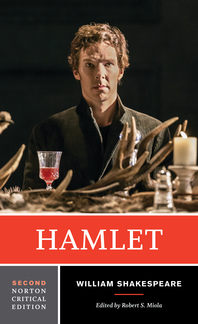 “A perfect volume to initiate majors into the discipline and delight of carefully examining presumptions, priorities, language, and structures of both primary and secondary texts.”
—Stephen R. Honeygosky, University of Pittsburgh

• The Second Quarto text, edited by Robert S. Miola and accompanied by his footnotes, headnotes, and introductory materials.
• Eighteen illustrations from 1604 to 2008, three of them new to the Second Edition.
• The Actors’ Gallery, presenting actors—from Sarah Bernhardt and Ellen Terry to Kenneth Branagh and David Tennant, two of them new to the Second Edition—reflecting on their roles in major productions of Hamlet.
• Seventeen critical interpretations, representing a wide range of historical and scholarly commentary.
• Afterlives, featuring fifteen reflections on Hamlet—from David Garrick and Mark Twain to Margaret Atwood and Jawad al-Assadi.
• A Bibliography of print and online resources.

Read by more than 12 million students over fifty-five years, Norton Critical Editions set the standard for apparatus that is right for undergraduate readers. The three-part format—annotated text, contexts, and criticism—helps students to better understand, analyze, and appreciate the literature, while opening a wide range of teaching possibilities for instructors. Whether in print or in digital format, Norton Critical Editions provide all the resources students need.