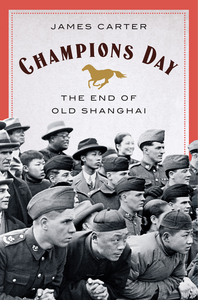 A triptych of a single day revealing the history and foreshadowing the future of a complex and cosmopolitan city in a world at war.

12 November 1941: war and revolution are in the air. At the Shanghai Race Club, the elite prepare their best horses and most nimble jockeys for the annual Champions Day races. Across the city and amid tight security, others celebrated the birth of Sun Yat-Sen in a new centre which challenged European imperialism. Thousands more Shanghai residents attended the funeral of China’s wealthiest woman. But the biggest crowd gathered at the track; no one knew it, but Champions Day heralded the end of European Shanghai. Through this snapshot of the day’s events, the rich and complex history that led to them and a cast of characters as diverse as the city itself, James Carter provides a kaleidoscopic portrait of a time and a place that still speaks to relations between China and the West today.

“With the eye of an unusually perceptive flâneur, in “Champions Day” [Carter] tells the story of Shanghai through its former racecourse (now part of the People’s Park). Mr. Carter is a wonderful guide for visitors in search of a long-gone city... Both books are cautionary tales about what happens, in Mr. Carter’s words, when the powerful exploit their environment, inviting war and revolution.” — The Economist