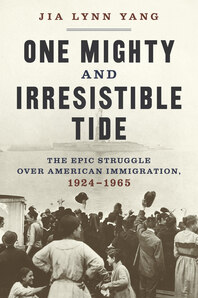 A sweeping history of the twentieth-century battle to reform American immigration laws that set the stage for today’s roiling debates.

The idea of the United States as a nation of immigrants has been at the core of the American narrative. But in 1924, Congress instituted a law that choked off large-scale immigration for decades, sharply curtailing arrivals from southern and eastern Europe and banning those from Asia.

In a riveting narrative with a fascinating cast of characters, Jia Lynn Yang recounts how lawmakers, activists and presidents worked relentlessly for the next forty years—through a world war, a global refugee crisis and McCarthyist fever—to abolish the 1924 law. The 1965 Immigration and Nationality Act, one of the most transformative laws in the country’s history, ended the system of racial biases and opened the door to non-white migration at levels never seen before—changing America in ways that those who debated it could hardly have imagined.