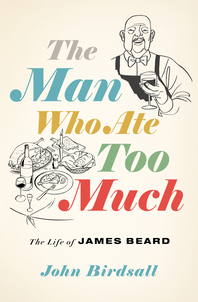 The definitive biography of America’s best-known and least understood food personality, and the modern culinary landscape he shaped.

After the Second World War, a newly affluent United States reached for its own gourmet culture, one at ease with the French international style of Escoffier, but also distinctly American. Enter James Beard, authority on cooking and eating, his larger-than-life presence and collection of whimsical bow ties were synonymous with the nation’s food for decades, even after his death in 1985.

In the first biography of Beard in twenty-five years, acclaimed writer John Birdsall argues that Beard’s struggles as a closeted gay man directly influenced his creation of an American cuisine. Starting in the 1920s, Beard escaped loneliness and banishment by travelling abroad to places where people ate for pleasure, not utility, and found acceptance at home by crafting an American ethos of food likewise built on passion and delight. Informed by never-before-tapped correspondence and lush with details of a golden age of home cooking, The Man Who Ate Too Much is a commanding portrait of a towering figure who still represents the best in food.

“Birdsall’s sentences have rhythm, too, and compress time and place so that a meal becomes a history.” — Ligaya Mishan, The New York Times Book Review

“Birdsall is not a polite biographer, and I say this with admiration... [he] applies his deep research to give us critical readings of Beard’s culinary style, documenting its zigzagging development through travel and apprenticeship, looking into dishes that shaped him and crucial meals he cooked, finding intellectual and sensual meaning in the relics of Beard’s delights.” — Tejal Rao, The New York Times Magazine

“Birdsall has a good story to tell, and tells it well...” — Adam Gopnik, The New Yorker

“Like the life of James Beard, this biography is big and beautiful, heartbreaking and true. It is the celebration that Beard deserves.” — Rien Fertel, The Wall Street Journal