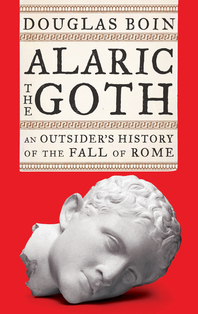 The first biography of Alaric to appear in English tells the history of the fourth-and fifth-century Roman Empire through the life of the Goth who attacked it.

In the conventional story of Rome’s collapse, violent “barbarians” destroy “civilisation”. Yet from a different point of view, those stale generalities become a history shockingly alive and relevant.

Alaric grew up near the border that separated Gothic territory from the Romans. He survived the emperor’s decision to separate immigrant children from their parents. Later, he was denied citizenship despite his service in the army. The three nights of riots the Goths brought to the capital in ad 410—led by Alaric— struck fear into the hearts of the powerful but were not without cause. Through Alaric’s story, Douglas Boin reveals the Goths’ complex and fascinating legacy in shaping the history we thought we knew but had never imagined from their perspective.

“This brilliant book... starts the story of the sack of Rome not from inside the walls of the eternal city, but outside, with Alaric the Goth. It’s a great trick, superbly executed. Some books tilt the world so that you will never quite see it in the same way again, and this is definitely one.” — Catherine Nixey, Summer Reads 2020, History Extra

“Boin paints a richly detailed portrait of the world in which Alaric maneuvered, defined by the thrashings of an empire in turmoil… A cogent, readable text that vividly conveys the fears and confusion that surrounded the issue of immigrants’ rights in a period of declining Roman power.” — Wendy Smith, The Boston Globe

“A new history argues the Goths who sacked Rome have been much traduced.” — Patrick Kidd, The Times

“The most engaging parts of Alaric the Goth, and by far the greater portion of its contents, diverge from Alaric’s story to give a sweeping view of Roman life near the fall of the empire. It’s here, especially in matters of Christian-pagan tension, that Mr. Boin excels.” — James Romm, The Wall Street Journal

“Few records survive of the Visigoth culprit Alaric (well, if you will destroy a literate culture...) but the historian Douglas Boin knows enough to clear up some misapprehensions. Alaric the Goth… is a Latin-speaker who longs for nothing so much as to be Roman… One snub too many, and he and his mob show the Eternal City to be fleeting. The book… understands what drives personal success far better than modern treatises on management and self-help… An “Outsider’s History” is how Boin describes his book about Alaric. History is seldom anyone else’s.” — Janan Ganesh, Financial Times

“Today, as Douglas Boin of Saint Louis University points out in his superb book, the word "Gothic" has become synonymous with all that is "dark, gloomy and macabre". History, it is often said, is written by the winners—but that is only if they can write. If they can't, then history is written by the losers, crossly.” — The Economist

“...a finely crafted account of how Alaric became the embodiment of Rome's self-defeating fear of the world outside its frontiers.” — Philip Parker, Literary Review