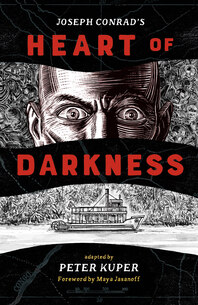 Joseph Conrad’s Heart of Darkness has unsettled generations of readers with its haunting portrait of colonialism and the brutal exploitation of African lives. Peter Kuper’s graphic adaptation reimagines this masterpiece for a new generation. Illustrated to evoke early twentieth-century woodcuts, Kuper’s Heart of Darkness confronts Conrad’s famously ambiguous, labyrinthine sentences and invents in stark black and white panels a visual language that excavates the hidden corners of Conrad’s 1899 masterpiece. Capturing the ominous atmosphere and hellish conditions of the Belgian Congo, Kuper transforms this lurid tale of madness, greed and evil into something shockingly modern. Long-time admirers of the novel will see Conrad’s opus with new eyes while new readers will discover a brilliant introduction to a classic work.

“Peter Kuper’s art style is a force to be reckoned with. His sense of expression sears itself into your eyes, with his characters appearing as if caught in a psychedelic nightmare. His style remains intact with his latest work - Heart of Darkness.” — Starburst