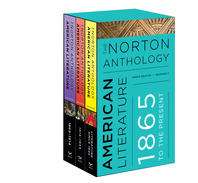 The Norton Anthology of American Literature includes more major works than any other anthology of American literature. The ninth edition offers 37 complete longer texts of which 2—Long Day's Journey into Night and A Streetcar Named Desire—are exclusives and 3—Nella Larsen's Passing, Abraham Cahan's Yekl: A Tale of the New York Ghetto and Nathanael West's The Day of the Locust—are newly added.

Designed to be teachable in a class period or two, these groupings of short texts focus on cultural issues and literary forms and movements. New clusters include "Science and Technology in the Pre-Civil War Nation", "Becoming an American in the Gilded Age", "Voices of Native America", "Varieties of Religious Experience", and "Ethnographic and Naturalist Writings".

THE APPARATUS YOU TRUST—EXTENSIVELY REVISED FOR CONTEMPORARY STUDENTS

Under the direction of new General Editor Robert Levine, the editors have made root-and-branch improvements to apparatus across the volumes to reflect both new scholarship and changing classroom interests. Period introductions and many headnotes have been extensively revised; hundreds of annotations and glosses fine-tuned; and bibliographies carefully updated.

Instructors can allow students to choose between the print text and the ebook—or they can give students access to both by packaging the ebook with the print anthology at no additional cost.