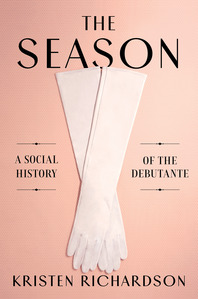 In this enthralling history of the debutante ritual, Kristen Richardson sheds new light on contemporary ideas about women and marriage.

Kristen Richardson, from a family of debutantes, chose not to debut but her curiosity drove her to research this enduring custom.

The story begins in England six hundred years ago when wealthy fathers needed an efficient way to find appropriate husbands for their daughters. Elizabeth I’s presentations at court expanded into London’s season of dances, dinners and courting, extending to the corners of the British empire and beyond. Richardson traces the social seasons of young women, and shares their captivating stories, often through their words from diaries, letters and interviews. While exploring why the debutante tradition persists—and why it has spread to Russia, China and other nations—Richardson has uncovered its extensive cultural influence on the lives of daughters in Britain and the US.

"Step into colonial Philadelphia and Jane Austen’s England, America’s Antebellum South and Mrs Astor’s parties, and learn how some of the young women felt about being put on display." — On the Bookshelf, Choice

"... Kristen Richardson’s sharp account of how the season evolved from its early days after the Protestant Reformation in England, through its conquest of a newly independent America, to its leap into Russia and China, is a more absorbing story than any period drama." — Financial Times

"Richardson has made a valiant effort to unearth some worthwhile social commentary. To this end, she presents a detailed examination of modern debutante societies... [Her] engaging study deserves credit for its persistently humane treatment of her subjects..." — The Telegraph