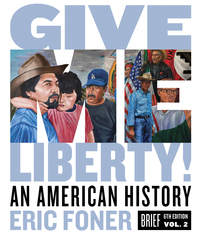 The leading U.S. history textbook, with a new focus on “Who is an American?”

A powerful text by an acclaimed historian, Give Me Liberty! delivers an authoritative, concise and integrated American history. In the Sixth Edition, Eric Foner addresses a question that has motivated, divided and stirred passionate debates: “Who is an American?” With new coverage of issues of inclusion and exclusion—reinforced by new primary source features in the text and a new secondary source tutorial online—Give Me Liberty! strengthens students’ most important historical thinking skills.