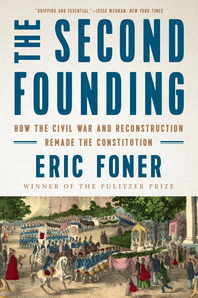 From the Pulitzer Prize-winning historian, an authoritative story of the constitutional changes that built equality into America’s foundation.

The Declaration of Independence announced equality as an American ideal but it took the Civil War and the adoption of three constitutional amendments to establish that ideal as law. The Reconstruction amendments abolished slavery, guaranteed due process and the equal protection of the law, and equipped black men with the right to vote. By grafting the principle of equality onto the Constitution, the amendments marked the second founding of the United States.

Eric Foner conveys the dramatic origins of these revolutionary amendments and explores the court decisions that then narrowed and nullified the rights guaranteed in these amendments. Today, issues of birthright citizenship, voting rights, due process and equal protection are still in dispute; the ideal of equality yet to be achieved.

“This brisk but far-reaching book... argues that the principal issues of our own troubled time pose the same conundrums that were the main areas of Reconstruction contention.” — Boston Globe