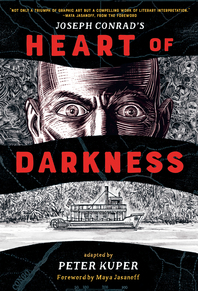 “[A] triumph of graphic art [and] a compelling work of literary interpretation.”—Maya Jasanoff, Coolidge Professor of History, Harvard University, from the Foreword

Acclaimed illustrator Peter Kuper delivers a visually immersive and profound adaptation of Joseph Conrad’s controversial classic that “doesn’t just retell the book [but] destabilizes it, forcing a reconsideration” (Etelka Lechoczy, NPR). Longtime admirers of the novella will appreciate his innovative interpretations, while new readers will discover a brilliant introduction to a canonical work of twentieth-century literature.

"Peter Kuper’s art style is a force to be reckoned with. His sense of expression sears itself into your eyes, with his characters appearing as if caught in a psychedelic nightmare. His style remains intact with his latest work—Heart of Darkness." — Starburst