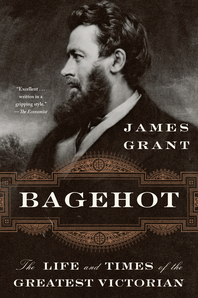 The definitive biography of a banker, essayist and editor of the Economist, by an acclaimed financial historian.

As editor of The Economist, Walter Bagehot offered astute commentary on the financial issues of his day and his name lives on in an eponymous weekly column. During the upheavals of 2007–9, the chairman of the Federal Reserve had the name of this Victorian icon on the tip of his tongue. Banker, man of letters, inventor of the Treasury bill and author of Lombard Street, Bagehot prescribed the doctrines that—decades later—inspired the radical responses to the financial crises.

"The most perceptive and brilliant economic and political writer of his time deserves a biographer of equal literary merit. In James Grant, Walter Bagehot has found him." — Mervyn King, former governor of the Bank of England and author of The End of Alchemy

"James Grant [is] one of the most influential contemporary commentators on Wall Street... in Grant’s hands, Bagehot’s life and career provide a superb prism through which to observe the extraordinary revolution in the British economy during the 19th century." — Simon Nixon, The Times

"... engaging new biography of Bagehot... In this very enjoyable book, Grant demonstrates that he has the measure of a fascinating—and great—Victorian." — Financial Times

"... his [James Grant's] book is excellent—built on a lot of study (including time in the archives) and written in a gripping style. Mr Grant is at his best when writing about Bagehot’s financial journalism and indeed his career as a banker. His accounts of the collapse of Overend Gurney, supposedly the Rock of Gibraltar of Victorian finance, and of “Lombard Street”, Bagehot’s book about that debacle, are exemplary." — The Economist