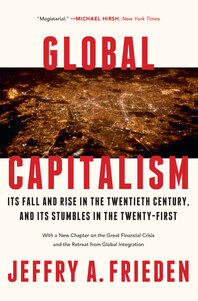 “Magisterial history... one of the most comprehensive histories of modern capitalism yet written.”—Michael Hirsh, The New York Times Book Review

A wonderful blend of “politics and economics, micro and macro, past and present in an accessible narrative” (The Washington Post), Global Capitalism presents an authoritative history of the twentieth-century global economy. Jeffry A. Frieden’s discussion of the financial crisis of 2008 explores its causes, the many warning signals for policymakers and its repercussions: a protracted recovery with accumulating levels of inequality and political turmoil in the European Union and the United States. Frieden also highlights China’s dramatic rise as the world’s largest manufacturer and trading nation, perhaps the most far-reaching development of the new millennium. Drawing parallels between the current period and the decades before the First World War, when the first era of global economic integration gave way to nationalist rivalry, Frieden’s history clearly shows that globalisation is neither inevitable nor irreversible but a political choice.

• With a new chapter on the great financial crisis and the retreat from global integration.

“Broad and ambitious in its sweep... One lesson with enormous contemporary resonance emerges: globalization is neither inevitable nor irreversible. Governments can choose to retreat into isolation and have often done so.” — Alan Beattie, FT Magazine

“Essential reading for anyone who wants to understand the history of globalization from 1870 to the present.” — John Bruton, Irish Independent

Also By: Jeffry A. Frieden